Former President Donald Trump reportedly praised Adolf Hitler to his then-chief of staff John Kelly, according to a report in The Guardian.

“Well, Hitler did a lot of good things,” Trump allegedly saidduring a 2018 trip to Europe to commemorate the 100th anniversary of the end of World War I, the Wall Street Journal’s Michael Bender writes in his book “Frankly, We Did Win This Election” and reported in The Guardian.

Bender interviewed Trump after he left office and writes that Trump denied the comments.

Trump’s comments on Hitler came as Kelly briefed Trump on World War I history and “reminded the president which countries were on which side during the conflict.”

Citing unnamed sources, Bender wrote that Kelly “told the president that he was wrong, but Trump was undeterred.” The former president cited Germany’s economic recovery in the 1930s under Hitler, to which Kelly “argued that the German people would have been better off poor than subjected to the Nazi genocide.”

Kelly also reportedly told Trump that “you cannot ever say anything supportive of Adolf Hitler. You just can’t.”

A retired Marine Corps general, Kelly was Trump’s longest-serving chief of staff. He resigned from the position in December 2018, after failing to bring military order to the White House. Kelly has been vocally critical of Trump, prompting the former president to disparage Kelly in response.

Trump’s visit to Europe was mired in controversy over allegations he disparaged military members and called America’s war dead as “losers” and “suckers.” The former president denied the allegations and described the people who suggested he said such things are “low lifes and they’re liars.”

Trump also canceled a cemetery visit during the trip, citing poor weather conditions. Trump denied allegations he canceled the visit because he refused to honor the dead. 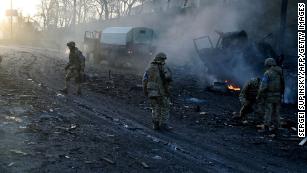 Rep. Henry Cuellar says he’ll ‘cooperate with any’ probe amid reports of FBI raid at…