The US State Department said Sunday that this weekend’s talks with representatives of the Taliban in Doha, Qatar — the first such gathering since the US withdrawal from Afghanistan at the end of August — were “candid and professional” while emphasizing that the Taliban “will be judged on its actions, not only its words.”

“The U.S. delegation focused on security and terrorism concerns and safe passage for U.S. citizens, other foreign nationals and our Afghan partners, as well as on human rights, including the meaningful participation of women and girls in all aspects of Afghan society,” a readout from the State Department said.
“The two sides also discussed the United States’ provision of robust humanitarian assistance, directly to the Afghan people.”
Suhail Shaheen, Afghanistan’s ambassador-designate to the UN, said the discussions “went well” in a statement Sunday evening. “Political issues were discussed in detail during the meeting and the Islamic Emirate considered full implementation of the Doha agreement as the best way of resolving problems and that the humanitarian assistance should not linked to political issues.”
Taliban spokesperson Zabihullah Mujahid told reporters on Saturday, “We had a detailed discussion with the American delegation in Doha.”
“During this meeting, discussions were made about the humanitarian assistance as well and this discussion will continue,” Mujahid said.
A State Department official had told CNN before the meeting that it was “a continuation of the pragmatic engagements with the Taliban on issues of US vital national interest.” The official told CNN that the meeting with the Taliban representatives “is not about granting recognition or conferring legitimacy.”
“We remain clear that any legitimacy must be earned through the Taliban’s own actions,” they said.
Since gaining control of the country, the Taliban have been accused of dire human rights abuses, including the unlawful killing of 13 minority Shia Hazaras. Afghanistan’s health care system has collapsed and there are serious food shortages.
October 11, 2021
Facebook Twitter LinkedIn Pinterest Reddit Share via Email Print 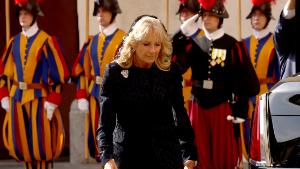