MILWAUKEE — Brook Lopez had to change his game amid the NBA’s 3-point revolution and become a stretch five, a center who shot and made 3-pointers.

He adapted with skill.

But in Game 5 of the Eastern Conference finals, the Milwaukee Bucks veteran went back in time to a day when he roamed the paint with dominance.

Lopez scored a playoff career-high 33 points and had seven rebounds, four blocks and two steals in Milwaukee’s 123-112 victory over the Atlanta Hawks on Thursday. The win gives the Bucks a 3-2 series lead and puts them one victory from the franchise’s first NBA Finals appearance since 1974.

“I’m just trying to go out there and help my team however possible, whether it’s playing that new, modern 3-ball game, floor-stretch game or being inside,” Lopez said.

Normally, All-NBA forward Giannis Antetokounmpo rules the paint for the Bucks, but he missed the game with a hyperextended left knee sustained in Game 4.

So the Bucks went old school. Stick the massive 7-foot, 282-pound Lopez in pick-and-roll situations and let him bludgeon the smaller Hawks.

Lopez scored 26 of his points in the paint, including six on offensive rebound putbacks.

“That was a great opportunity for him to I think just get the ball a little bit more, try and use him a little bit more and he came through big time,” Bucks coach Mike Budenholzer said. “You know there were a couple where he just made plays, but he did it in a lot of different ways. He did it in pick-and-roll. He did it on the offensive glass. Got to the free throw line.

“Just an overall really, really impressive effort. He’s such a great teammate. He always wants to be there and he wants to deliver for his team and he stepped up big tonight.”

He punctuated the performance with dunks, tip-ins and unfathomable alley-oop slams. Midway through the first quarter, when the Bucks were establishing their presence in the lane, Jrue Holiday threw a lob to Lopez. It was, in Holiday’s words, “a bad pass.”

Lopez, 33, stretched his right arm as far back as it could go to control the basketball and then threw down a one-handed dunk.

“That’s about as long as I’m going to stay in the air in my life, probably,” Lopez said.

Bobby Portis had a view from the top of the 3-point line.

“Guys don’t even understand how athletic Brook is to do the things he does,” Portis said. “He’s a great basketball player, but that dunk right there, I was at the top of the key and I saw him coming and I thought, ‘Wait, that’s out-of-bounds,’ and he dunked it. That was a special moment. Got the crowd really, really hyped, too, and from there, it was our game.”

This is what happens when a team is without its star. It is forced to play a different style, one the opponent isn’t familiar with. That’s how Atlanta won Game 4 without injured point guard Trae Young.

Milwaukee is second-best in points in the paint during the playoffs. It’s a major part of its offense — in part because when the defense collapses to defend the rim, the 3-point shooters are open. The Bucks didn’t abandon that core philosophy.

The Hawks weren’t surprised Milwaukee made Lopez a major part of the offense. The Bucks went in that direction in the nine games they played with Lopez starting and Antetokounmpo missing games during the regular season.

“They were going to continue to attack, even without Giannis in the lineup. That’s just how they play,” Atlanta interim coach Nate McMillan said. “We knew that they would look to go to Lopez more, and they did. They just dominated the paint tonight. … They want to play from the inside out, and if you don’t guard the paint, they will punish you in the paint. If you take away the paint, they kick it out for 3s. That’s their game.”

Lopez’s performance was reminiscent of his days with the Nets when he was called Brooklyn Brook. Holiday reminded reporters that “Brook is a leading scorer for somebody else’s franchise (the Nets), so he’s definitely a bucket.”

After a 2017-18 season in which he was misused by the Los Angeles Lakers, Lopez found a home with the Bucks, who utilized his inside-outside skills alongside Antetokounmpo and Khris Middleton.

Now, Lopez is one victory from his first NBA Finals appearance.

“What’s great about today is we were all basketball players playing together on offense and defense,” Lopez said. “We were playing off one another, making plays, making extra passes. It was a lot of fun tonight.” Australia look unstoppable, and they have worked very hard to get there 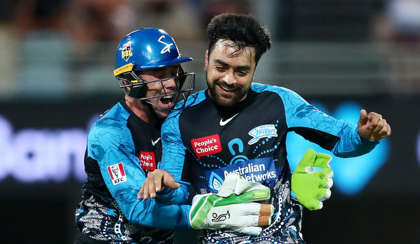