Former Southern California running back Reggie Bush still hopes to have the Heisman Trophy he won in 2005 returned to him more than a decade after he was forced to give it back due to NCAA rules violations.

Bush posted on Twitter a statement regarding efforts to lobby the Heisman Trophy trust and the NCAA about his case. In addition to getting the award back, he is hoping to have his records reinstated. Bush said neither group has been willing to help his case.

“We left multiple messages for Michael Comerford, the President of the Heisman Trust, but instead received a call from Rob Whalen, the Executive Director, who stated that Mr. Comerford would not be calling us back,” the statement said. “We reached out to the NCAA on multiple occasions and received no help or got no response at all. It is my strong belief that i won the Heisman trophy “solely” due to my hard work and dedication on the football field and it is also my firm belief that my records should be reinstated.”

The likelihood of Bush succeeding with either party is remote even with some public support as the NCAA enters a new era with athletes profiting off their name, image and likeness.

However, none of the violations in Bush’s case were related to NIL issues, so conflating to the two is disingenuous.

In addition, there’s no history of an NCAA infractions case being overturned more than 10 years after it was decided. It would be even more remote without any new evidence coming to light. 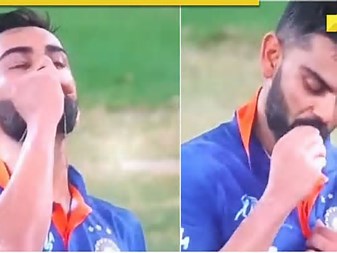 IND vs AFG: Why Virat Kohli kissed his ring after blasting 122 not out against…